Perhaps I was a little premature in my quasi-dismissal of Factorization for wheat farming last Friday. Sure, I was frustrated that a perfectly good build had been rendered obsolete as soon as I had designed it, but that doesn’t disqualify Factorization so much as it reveals the inadequacy of my knowledge and use of it. An excellent example of a wheat farm exclusively powered by Factorization and vanilla Minecraft resources has been designed by Broomstone. If you haven’t already, you really should check out his FTB forum thread. He also has an expandable design for a one-servo crystallizer distribution solution that is far more elegant than what I have suggested. I have recently maxed out the capacity of my Factorization Building of Ore-Processing Awesomeness and will soon be expanding the crystallizer section of it to compensate. I will probably be adapting Broomstone’s design. END_OF_DOCUMENT_TOKEN_TO_BE_REPLACED 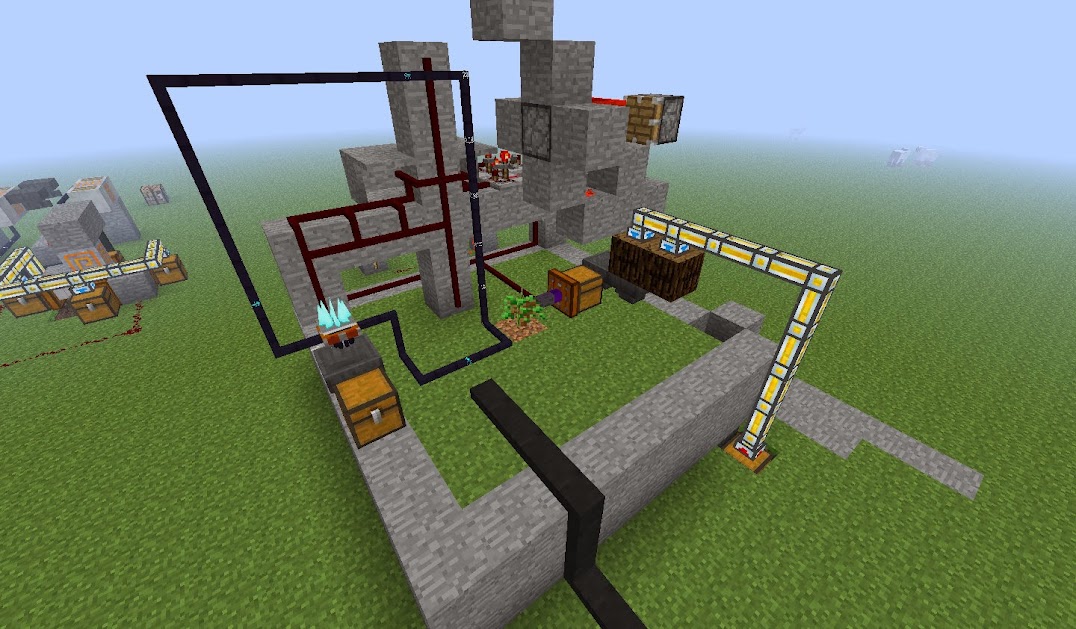 Yes. The tree farm works despite the update to Factorization.

The Factorization 0.8.30 update most certainly broke my wheat farm design, but not in the way I had thought it would, and this isn’t a good thing. What happened was that servo inventories were reduced to a single slot, but wheat harvesting gives you two crops: wheat and seeds. What I thought was going to happen as a result was that the servo would pick up one item and leave the other on the ground. My original plan to deal with this involved a layer of powered rail under the field moving a hopper cart. This would have picked up whatever was left on the ground: problem solved with minimal fuss. END_OF_DOCUMENT_TOKEN_TO_BE_REPLACED 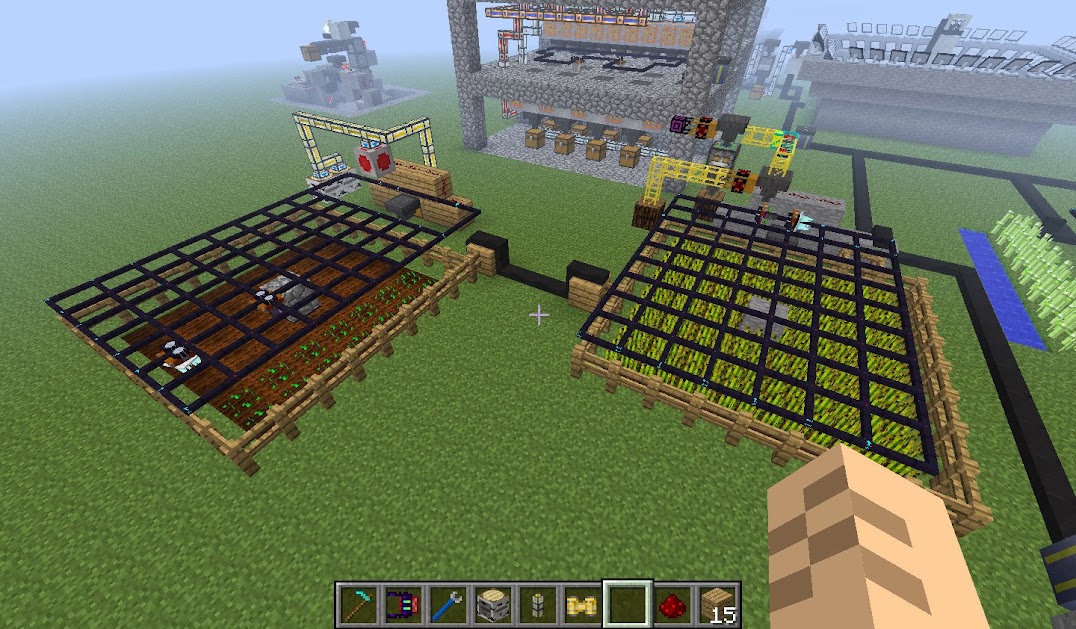 ***UPDATE: Thanks to Broom Stone (see comments below) for noticing that this design won’t work with versions of Factorization after 0.8.29, because servo inventories have been reduced to one slot. This means that the lacerator servo cannot collect both seeds AND wheat. I’ll post a suggested redesign at some point in the near future (probably involving hopper carts). Other than that, I hope the following tutorial is still a helpful example of how to use and program servos.***

There are lots of ways  to automate or semi-automate wheat farming, even with only vanilla resources. A stream of water can be used to harvest, while dispensers can re-plant seeds. Using an elaborate Redstone clock, one can even set a farm to auto-harvest after a given interval (hopefully enough time to let most of the wheat mature). Many different mods offer alternative methods, each with their own strengths and weaknesses. The obvious mods that come to mind are Forestry, Thaumcraft, Steve’s Carts, and MineFactory Reloaded, and these four are strong because they automatically monitor your wheat and harvest it when it has matured. Set up the system and you never have to worry about it again, for the most part. END_OF_DOCUMENT_TOKEN_TO_BE_REPLACED

What’s so awesome about Factorization’s servos? Well pretty much everything, and neptunepink isn’t even done with them, yet. Even what has been implemented so far has tremendous potential to make Factorization not only one of the most imaginative and satisfying “tech” mods out there, but also one of the most powerful and versatile. While sockets and servos have a steep learning curve, once you’ve got down the basics you can do quite a lot with them. END_OF_DOCUMENT_TOKEN_TO_BE_REPLACED

How to Automate a Factorization Crystallizer

First of all, Happy Valentine’s Day to my wife, CoffeeGirl. 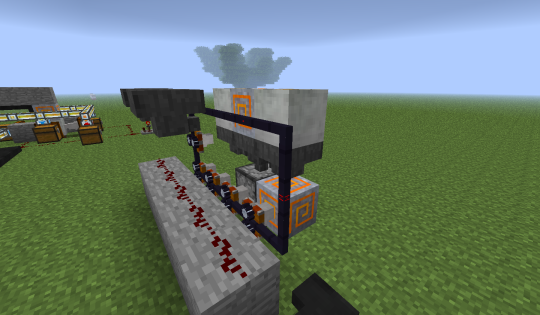 A system of five servos can automate the distribution of reduced metal chunks among the crystallizer’s five slots.

Up until recently, the one major obstacle to fully automating a Factorization Ore-Processing system has been the lack of an easy way to distribute reduced metal chunks evenly among the available slots in a crystallizer. When a crystallizer receives items, it simply puts it into the first available slot. When that slot is filled up, then items go into the next one. The problem with this is that crystallizers are extremely slow. One pass takes 15 or 20 minutes of real time  (I’ve seen people say both, but I’ve never timed it). Each pass can crystallize reduced metal chunks from five slots at the same time – but only if there are reduced metal chunks in each slot. So if you’re just pumping items into a crystallizer, you are extending your already nearly eternal wait time. This wait time is precisely what makes Factorization non-competitive with other tech mods’ ore-processing systems, even if you get at least 50% more ore from Factorization. END_OF_DOCUMENT_TOKEN_TO_BE_REPLACED 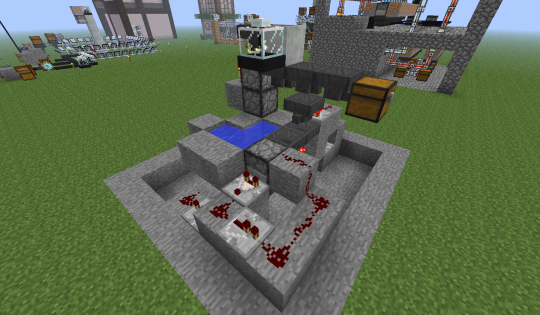 In my last post about my Factorization Building of Ore-Processing Awesomeness, I noted that I used Thermal Expansion Fluid Transposers to refill the water buckets that the Factorization Mixers need to do their mixing business. I did this for two reasons: 1) to save space and 2) because I’m not really a Vanilla MC Redstone stud. But something (conscience? curiosity? manic obsession with all things Minecraft?) wouldn’t let it slide. So I spent some time in my 1.6.4 modded test world and worked out a system that, if I do say so myself, is pretty sweet … if bulky. END_OF_DOCUMENT_TOKEN_TO_BE_REPLACED

The Factorization Building of Ore-Processing Awesomeness

Factorization is one of the cooler, more think-outside-of-the-box mods I’m familiar with. Recent versions have been changing things up a little bit, and, to be honest, my first reaction to these changes wasn’t positive. It’s not that I’m philosophically or brain-chemically opposed to change. For the most part, I have welcomed the changes in vanilla Minecraft (I started playing the day 1.3 released) and in many of the mods I play with. I suppose my trepidation about recent versions of Factorization was that I didn’t see the immediate sense or benefit of some of the changes. Specifically, I am talking about the very significant change in auto-crafting from the craft packet system to compression crafters, the  move away from routers to sockets and servos, some of the changes to the Factorization barrels, and, to a lesser extent, the change from the Grinder block to the Lacerator socket. These changes seemed to make the mod even less intuitive than it had been (which wasn’t very). Furthermore, the servos just felt like a totally different mod. In other words, it didn’t feel at first like the mod was moving forward but sideways. END_OF_DOCUMENT_TOKEN_TO_BE_REPLACED