You know, I’ve never really spent a whole lot of time on Minecraft’s minecarts until pretty recently. It always seemed more effort than it was worth, particularly when I started using mods (which happened within a couple of months of my introduction to Minecraft). Classic Technic/Tekkit included Railcraft, but … I dunno … I just never really got the vision of the mod as a whole, even though I tended (early on) to include it in my own personal modpacks.

But recently (as you may have noticed), I’ve returned to the joy of just plain old vanilla Minecraft (albeit, the newest versions of it). And as I’ve explored the way the base game is constructed more thoroughly, particularly in the realm of automation and Redstone mechanics, what I’ve seen is that minecarts are actually a tremendously fun feature of the game with tremendous potential for automating processes other than “take-stuff-from-here-to-there-repeatedly”. END_OF_DOCUMENT_TOKEN_TO_BE_REPLACED

A complicated Redstone system for the unreasonably parsimonious.

Are you the kind of Minecraft player who won’t cook anything in a furnace until you have eight items (because that’s how many items a piece of coal or charcoal can cook – of course you would already know this if you are such a Minecraft player)? I am. I know it’s silly, because there’s more than enough coal in any Minecraft world, especially in a single player world. And IF I should ever run short, I can always cook up some charcoal. There’s no real reason to be the kind of player who demands 100% efficiency from my coal supply.

BUT such a player I am, nevertheless. I am also the kind of Minecraft player who isn’t satisfied with a process being easy and manual if I can make it complicated and automatic. So I have come up with a way to have a furnace cook items in batches of eight automatically using a (relatively) simple Redstone device that I call the 100% Efficient Furnace. First, I’ll explain how it works in detail, then I’ll show you how to build one from the ground up. END_OF_DOCUMENT_TOKEN_TO_BE_REPLACED

I’m currently working on fine-tuning my farming room. This means that showing off my lubricant production will be a little while longer. I realized that I wasn’t using Rotarycraft’s Fans to the fullest of their capacity. So instead, today, let’s talk about moving up tech tiers in Rotarycraft.

If you play Rotarycraft for any length of time, you’ll soon realize that a lot of what you really want to do with the mod is out of reach without bedrock dust and ingots. Wait. Bedrock? That unbreakable stuff around y-levels 1-5 below which is just an endless void? Yeah. Only it’s not so unbreakable, though breaking it requires a lot of power compared to what I’ve shown so far (i.e. powering fermenters, water pumps, grinders, even an extractor, for goodness’ sake).

Behold, the Bedrock Breaker: the machine that holds within it the keys to Rotarycraft’s top-tier tech and generally crazy-awesome stuff! 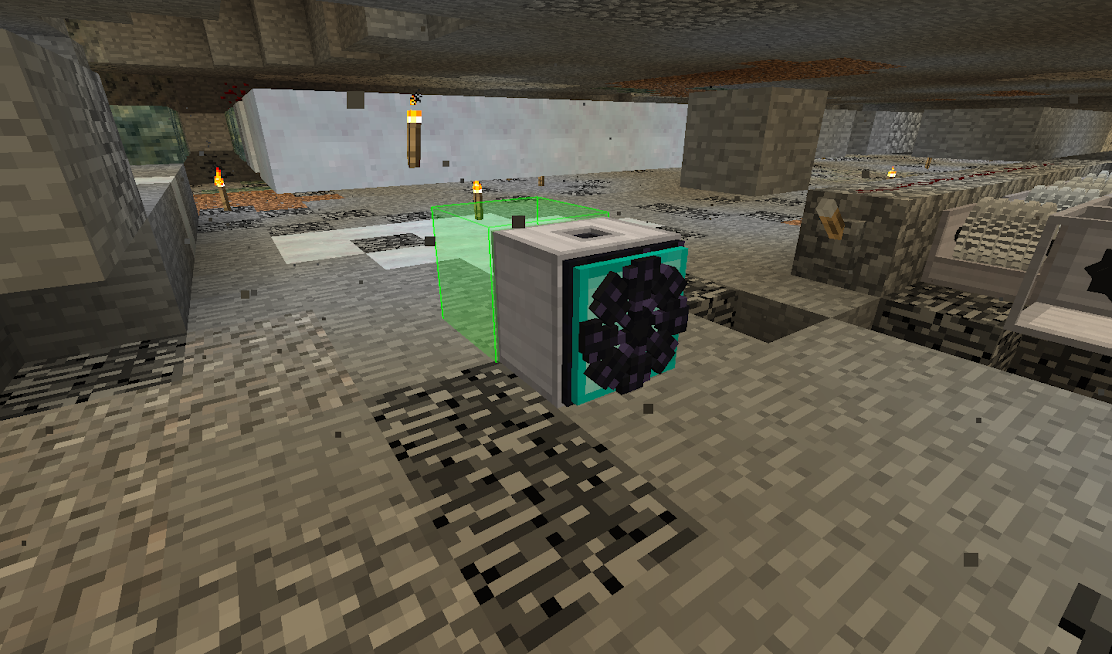 END_OF_DOCUMENT_TOKEN_TO_BE_REPLACED

***Beware: this post is a doozy*** With v25 of Reika’s mods being released any day, now, solar power is about to be rendered impossible as an early-game strategy. Nevertheless, the setup I started describing in my last post not only works (assuming you have access to the materials necessary to craft it), but also serves as a useful way to introduce many of the blocks made available by Electricraft. As I mentioned before, the problem with solar power is that it doesn’t work at night. But with Electricraft, what we can do is stabilize the energy system by storing the mechanical energy the solar tower generates during the daytime in the form of a battery, which can provide that energy on demand, day or night.

END_OF_DOCUMENT_TOKEN_TO_BE_REPLACED

With all the cobblestone, ore, and other goodies coming into your inventory through your boring machine, fueling your furnace operations is going to become a high priority. Fortunately, Rotarycraft has two ways to use energy for smelting purposes. A slightly later-mid-game option is the lava smeltery which cooks 18 items at a time (and quickly), but which requires both rotational power and a constant supply of lava. More practically at a relatively early stage in the game, you can use one of two heaters to heat a vanilla furnace. The one called simply the heater requires rotational power and fuel, while the friction heater requires nothing but rotational power. It is this last option that I’m going to use for this build. Furthermore, I’m going to take advantage of an option for passive power generation in Rotarycraft to power this friction heater: solar towers. This project is big, and will take two lengthy posts to describe. END_OF_DOCUMENT_TOKEN_TO_BE_REPLACED

In the Fast Lane to Rotarycraft’s Boring Machine

So you’re playing Rotarycraft, you’ve got the blast furnace, the worktable, a fermenter or two, and grinder. What do you do next? Farming? Heck, no. You go directly for the machine that will help you tear apart the earth’s core in search of filthy lucre and non-sustainable natural resources: the boring machine.

Here is my boring machine powered by two AC electric engines through a worm gear. What does all of this mean? Read on …

END_OF_DOCUMENT_TOKEN_TO_BE_REPLACED

Okay, so my last post on Rotarycraft was a little heavy on the technical stuff, most of which just won’t make any sense to you until you’ve wrestled with the mod and learned some of its lessons the hard way. Perhaps it would be helpful to stop for a moment and really clarify what makes sense as an early game strategy in Rotarycraft. This I will attempt to do with minimal recourse to Newton-meters and radians per second.

First of all, there is no sense in me writing a comprehensive “How to get started in Rotarycraft.” It’s already been done and done well. Furthermore, for explanations of most of the individual elements in Rotarycraft you can find videos or articles, including three wikis (yes, apparently this mod merits three wikis).

Instead, let’s talk about setting priorities. Once again, I’m assuming a game where Rotarycraft is the tech mod of choice (no cheating with the Magnetostatic Engine). So what machines do you need to build in order to open up the game? Two large-scale priorities come to mind: 1) ore-multiplication, and 2) automated mining. Before either of these, though, you have to be able to make HSLA steel. END_OF_DOCUMENT_TOKEN_TO_BE_REPLACED

The Challenge of Rotarycraft: Powering the Grinder

I said a couple of posts ago that Rotarycraft is the thinking player’s tech mod. What I mean by this is that the way one produces, transmits, and uses power in Rotarycraft requires of players a degree of problem-solving effort not needed by the other major tech mods (like Industrial Craft 2, Thermal Expansion, or Mekanism). Case in point: the grinder. The grinder is one of the Rotarycraft machines that you need to get up and running pretty early in the game. This is for two reasons: 1) it makes lubricant from canola seeds, which you have to have in order to use gearboxes (without which what you can do with Rotarycraft is extremely limited); 2) it is the mod’s early game ore-multiplying method. It triples ore output, but this is no cheap metal machine: you’re going to use lots of iron in the course of a Rotarycraft game.

The grinder. It doesn’t just look dangerous: don’t stand on top of it. This is experience talking.

END_OF_DOCUMENT_TOKEN_TO_BE_REPLACED

The space within my water mill building pretty quickly proved insufficient. But it was never intended to be my final base. After doing some work on farming and animal husbandry (which I will discuss in future posts), what I really needed more space for was 1) ore-processing and storage, and 2) first-stage magic and magic mod stuff (research tables, AM2 crafting altar and nexi, enchanting table, potion-brewing station). Because facilities for ore-processing were the top priority, and because I had from the very beginning of this game wanted to put a blacksmith building nearby to my water mill, I decided to build a two-story thatched roof smithy whose second floor would be dedicated mostly to the magic mods and their research stations. Here is what resulted: 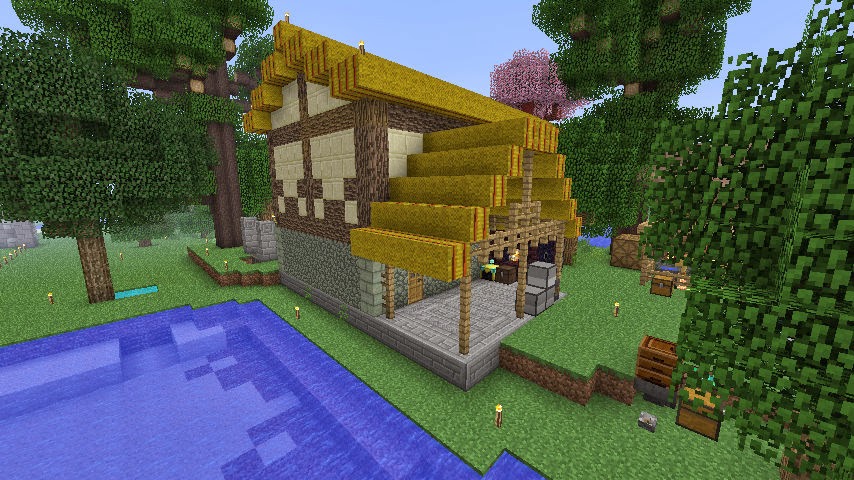 The smithy. Dadgum, this took a lot of wheat.

END_OF_DOCUMENT_TOKEN_TO_BE_REPLACED

How to Automate a Factorization Crystallizer

First of all, Happy Valentine’s Day to my wife, CoffeeGirl.

A system of five servos can automate the distribution of reduced metal chunks among the crystallizer’s five slots.

Up until recently, the one major obstacle to fully automating a Factorization Ore-Processing system has been the lack of an easy way to distribute reduced metal chunks evenly among the available slots in a crystallizer. When a crystallizer receives items, it simply puts it into the first available slot. When that slot is filled up, then items go into the next one. The problem with this is that crystallizers are extremely slow. One pass takes 15 or 20 minutes of real time  (I’ve seen people say both, but I’ve never timed it). Each pass can crystallize reduced metal chunks from five slots at the same time – but only if there are reduced metal chunks in each slot. So if you’re just pumping items into a crystallizer, you are extending your already nearly eternal wait time. This wait time is precisely what makes Factorization non-competitive with other tech mods’ ore-processing systems, even if you get at least 50% more ore from Factorization. END_OF_DOCUMENT_TOKEN_TO_BE_REPLACED