I’ve been a little tardy in posting anything this week on Minecraft. The reason is simple: I haven’t been playing much Minecraft recently. Don’t worry. I’ll get back to it, but I needed a little break.

At first that break took the form of a Civilization 5 marathon (Make India Great Again!), winning by a culture victory (first time for that, actually). But the thing about Civilization in any form is that once I finish a game I find myself unmotivated to play it again for a little while. I have Rimworld (which is an awesome game – you should definitely check it out), but I just didn’t feel like playing it. What I really wanted to play was an Elder Scrolls game, specifically Morrowind (the original, not not the TES Online expansion). END_OF_DOCUMENT_TOKEN_TO_BE_REPLACED

Minecraft Birthday Party for a Grown Man? You Betcha!

My wife is objectively, quantifiably, irrefutably, and without any qualification, the best. The latest evidence of this was our small family celebration of my birthday, themed after Minecraft in a manner any 10 year old would envy. 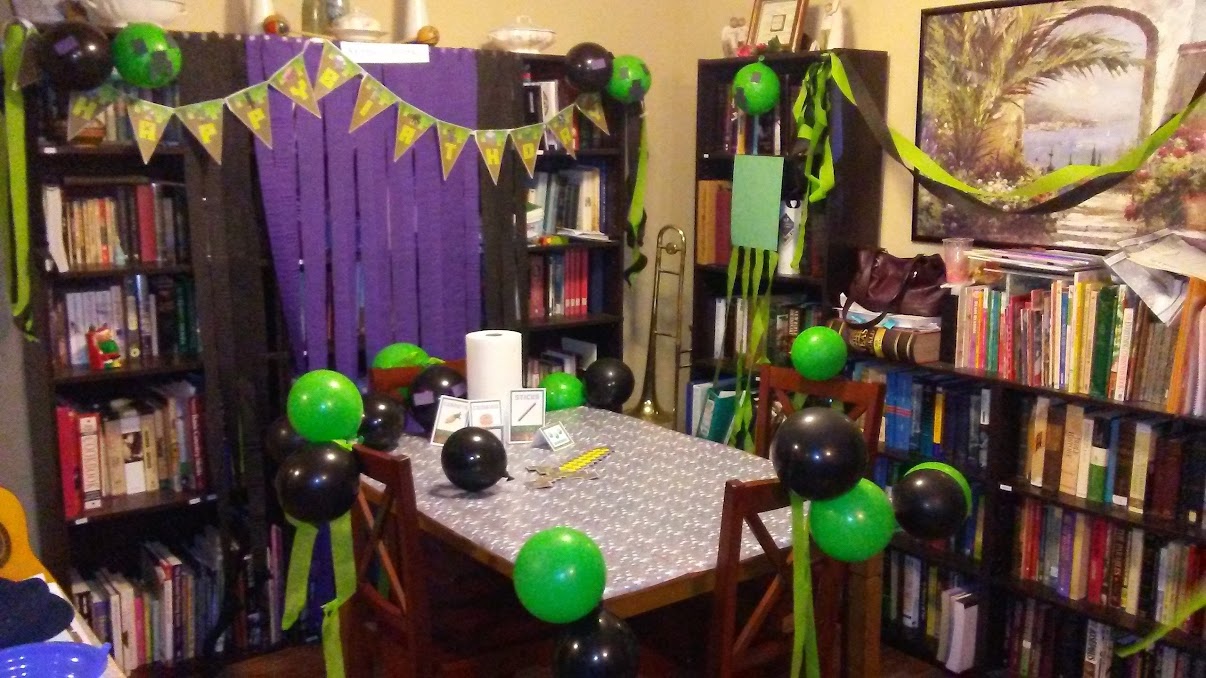 Creepers and Endermen everywhere, blocky food on the menu, even my own Nether Portal.

END_OF_DOCUMENT_TOKEN_TO_BE_REPLACED

Had I planned ahead, this post would be irrelevant. But me being who I am, and 1,000 mile inter-State moves being what they are, I just wasn’t able to get anything written, let alone polished and published, last week. I should be able to get back on schedule this week, though.

So, what are my blogging plans for the next several weeks? I want to continue to focus on Reika’s mods, especially Rotarycraft and (eventually) Reactorcraft. I did have a little time to play Minecraft last week, and I already had several projects to write about, just not the strength of will to write about them. So, coming up will probably be a look at ways Rotarycraft can be used to automate farming. After that, I want to talk about what things are needed to make the jump into the next tier of technology, specifically tungsten and bedrock dust. So be on the lookout for that stuff. END_OF_DOCUMENT_TOKEN_TO_BE_REPLACED

The much-anticipated update for Reika’s mods to v25 has now been released. There are a lot of important tweaks, changes, improvements, and nerfs (especially for Rotarycraft – wow, that’s a long list). I need to take some time to go through the change log and see how it’s going to affect my current game, but for today, let’s take a look at some of the cool things added to GeoStrata.

END_OF_DOCUMENT_TOKEN_TO_BE_REPLACED

Not long ago I was interviewed via email by a journalist who was writing an article about the possible educational benefits and uses of Minecraft weighed against parental concerns about it (which aren’t really about Minecraft, per se, but about the temporal black hole that video games, in general, can be). The article has just gone live today at http://national.deseretnews.com/article/1498/Could-Minecraft-help-kids-get-smarter.html#. Mr. Wecker’s quotation of our interview, though brief, captures the core of what I think on the subject. Minecraft can be an amazing tool for education. One of the specific things that I emphasized in the interview that didn’t make it into the article concerns the way mods can be used to enhance and realize Minecraft nascent educational potential. Tech mods like Industrial Craft very often are based (albeit sometimes loosely) on real-world technology and science. I’ve recently learned quite a lot about geology from playing mods like Underground Biomes and Terrafirmacraft. As I wrote to Mr. Wecker, I would like to see modders think creatively about writing mods that are intentionally educational. Below is what I wrote to Mr. Wecker in full. I think it merits a blog post.

From my email correspondence with Mr. Wecker

“I think Minecraft has a lot of potential as a teaching tool. At the most basic level, it is a medium for free or directed creative expression, which, I think, is largely under-appreciated in elementary education. Kids learn best by playing. END_OF_DOCUMENT_TOKEN_TO_BE_REPLACED

I took a little break from blogging the last couple of weeks. Part of the reason has actually been a change in my Minecraft-playing schedule occasioned by my wife’s decision to play, as well. In my last post about my water-mill building, I mentioned that I had selected a set of mods that enhance vanilla Minecraft’s farming and mining aspects and that add some of the best magic/alchemy mods out there. This is primarily because these are the aspects of Minecraft that most interest my wife, while I am pretty much interested in all aspects of Minecraft. The complete set of mods (for MC 1.6.4) we use are: