How quickly can Minecraft move items from one chest to another? Faster than I realized.

Prior to Minecraft 1.5, item transfer was difficult and incomplete without using mods like BuildCraft, RedPower, or Thermal Expansion. You could use minecarts to get items from point A to point B, but you had no way to transfer items from one inventory to another, meaning items had to remain in the minecart until you moved them manually into a nearby chest (unless, again, you used a mod – specifically RailCraft). The same was true of water canals: you could move items from, say, a mob grinder to a place inside your base, but you couldn’t deposit said items within a chest.

That all changed with the introduction of the hopper in the 1.5 update. Some of you may remember that the BuildCraft mod had already introduced a hopper prior to the 1.5 update whose function was pretty much to be a buffer block (desperately needed because of certain quirks in the way BuildCraft pipes worked), but the hopper that Mojang introduced into the vanilla game in 1.5 so perfected the idea of the hopper that BuildCraft actually removed their own hopper in subsequent versions of the mod. Hoppers along with two other items introduced in 1.5 – the dropper and the comparator – made possible some pretty sophisticated item transfer and sorting systems, about which I’ve posted several times. At the core of these systems are two basic ideas: the hopper chain and the dropper chain.

Now, I love hopper and dropper chains, but they have one important limitation: the speed of transfer is basically fixed. There aren’t these convenient upgrades such as you can craft in many mods to increase the volume and speed of item conduits. A hopper transfers items at a fixed rate of 1 item per 8 game ticks (= 1 item per 4 Redstone ticks, or 1 item every 0.4 seconds of real time). Dropper chains can transfer items slightly faster because they are operated by a Redstone clock (generally a comparator clock) which can pulse faster than once per 4 Redstone ticks. Even so, the rate of transfer is basically the same in the grand scheme of things.

But what if I want items to move faster than this? Is there anything can be done? Actually, yes. While we cannot make hoppers or droppers faster, we can double and even quadruple the speed at which items are transfered by doubling or quadrupling the size of our conduit, so to speak. In other words, instead of one line of hoppers or droppers taking items from point A to point B, we can use two or four parallel lines of hoppers or droppers.

Example A: Two Double Chests and a Bunch of Hoppers

All of these examples begin with a double chest on two hoppers. Every 8 game ticks, each hopper will pull one item from the double chest, meaning twice as many items are being pulled and transferred every 8 game ticks. In Example A, these two hoppers simply lead into two parallel hopper chains, both of which finally deposit into a common destination inventory.

Two lines of hoppers carry items twice as fast as a single line of hoppers – you do the math. 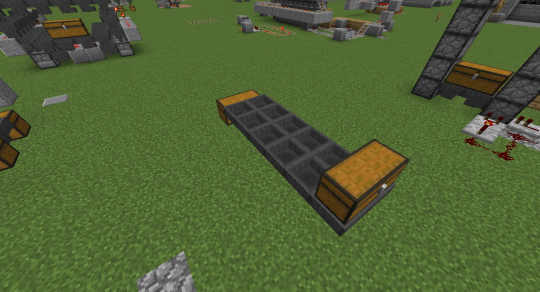 You can divide items into two separate dropper chains, each with its own comparator clock.

At the top of the chain simply face the droppers inward to a destination double chest. 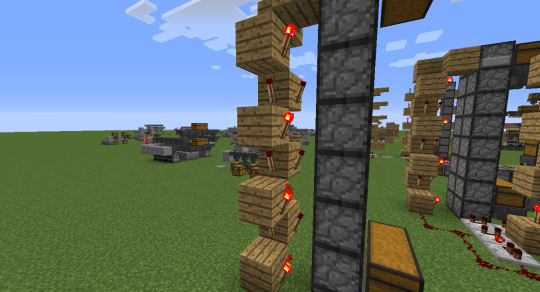 This kind of torch ladder is generally more effective with vertical dropper chains than the torch tower that I used in the non-adjacent example.

Horizontal dropper chains are more complicated even when dealing with just one chain, but they are potentially slightly faster than vertical dropper chains. Non-adjacent parallel chains are not too difficult to execute. Adjacent chains took quite a bit of experimentation, but ultimately I stumbled upon a design that works. 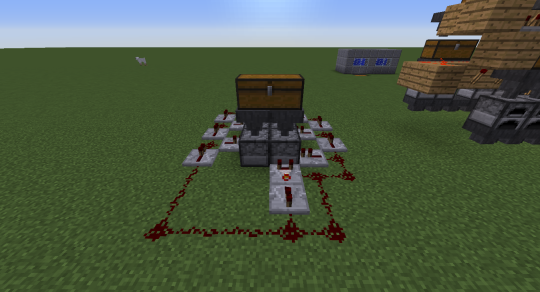 This image shows the deposit chest. Again, the comparator needs to read the dropper under the hopper that was placed first.

An overhead view of the Redstone, with the destination chest on the top of the image (items move upward on this image). All repeaters are on a single tick (default setting).

You can use droppers to shoot items out into a water canal running over ice blocks and terminates in hoppers. This can actually be an extremely fast way of transferring items.

Here’s the way the Redstone looks. The comparator reads the dropper under the hopper that was placed first.

Activated by the comparator clock, the droppers shoot items into this water canal (over ice blocks, to speed up the movement of the items).

I put upside down stair blocks over my hoppers to keep the items from passing over the hoppers (which they do periodically).

I also cover the top of the water to keep items from jumping out of the canal (which they do periodically).

Finally, it is possible to distribute items from a double chest evenly into four droppers and to use a single comparator clock to send four streams of items out into a four block wide water canal over ice blocks that terminates in four hoppers leading into a common double chest. This method of item transferral is insanely fast for vanilla Minecraft.

The same basic idea as the last example, but four wide instead of two wide. 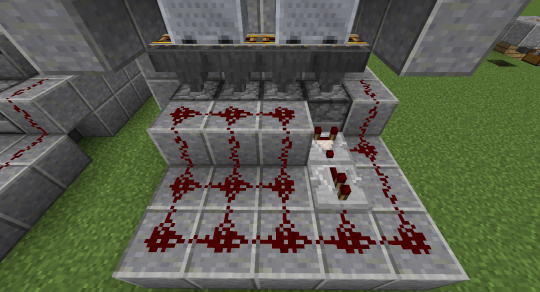 Redstone needs to look like this, with the comparator again reading the dropper under the hopper that was placed first.

At the end of the canal place four hoppers all pointing forward (in the direction of the flow of water).

Now place two more hoppers facing inward into the destination chest. Four of the six hoppers should be pointing into the chest.

Again, use upside down stair blocks over the four inner hoppers and cover up the canal.

What About Slowing Things Down?

Sometimes, for various reasons, you might want to slow down the rate of transferral. That’s easy to do with dropper chains: you just decrease the rate of your Redstone clock by right clicking a repeater or inserting a repeater where there hadn’t been one. But what about hoppers? Can they be slowed down?

A simple comparator clock (repeater on two ticks) connected to a hopper. This clock will intermittently deactivate the hopper whenever items are passing through it. 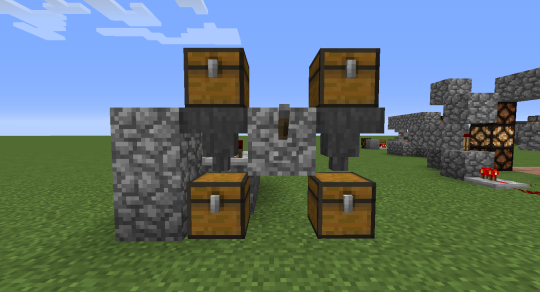 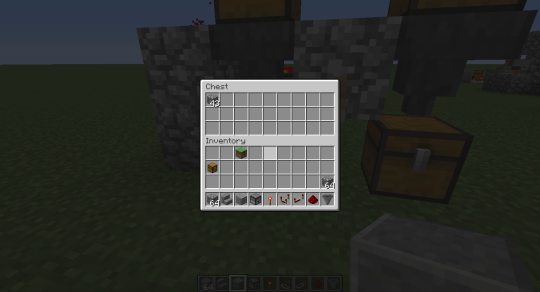 By the time the right hopper had transferred an entire stack of cobblestone, the left hopper had only transferred 43, meaning the comparator clock with a repeater on 2 ticks produced a speed reduction of approximately 33%.

Before doing these experiments, I don’t think I had a full appreciation for just how remarkably versatile item transfer systems could be in vanilla Minecraft. I wonder whether it might possible to increase speed even beyond 4x.