Today we look at a more advanced, versatile, and intelligent minecart loading system.

Last post I talked about two simple Redstone devices that you can use to automatically load and unload minecarts if you want to use minecarts as an item transferral system. I briefly mentioned some of the limitations of the falling edge circuit as a loading system. In short, a simple falling edge circuit just isn’t smart enough to provide the versatility you might need if, say, you want to just dump a whole bunch of stuff into a chest and let the minecart system figure out how to get all those items from point A to point B. Today, I want to show you a more advanced loading and transferral system that works really well, never gets clogged, and actually gets a little faster and more efficient the more items you load into it.

If the straight track is along the X axis (east-west), an unpowered intersection points to the east. 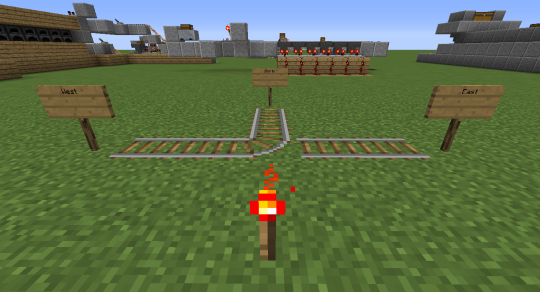 While a powered intersection points to the west.

If the straight track is along the Z axis (north-south), an unpowered intersection points to the south. 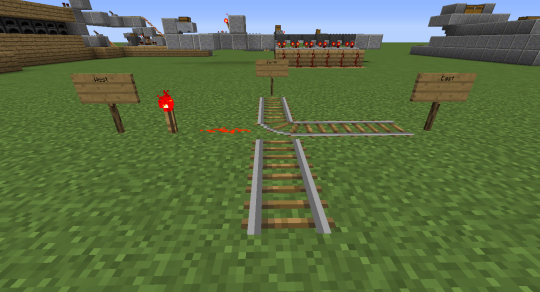 While a powered intersection points to the north.

So the first thing I dislike about the simple falling edge loading system I showed last week is how slow it is. The problem is that it is bottlenecked by going through a single hopper.

Now, if you are loading items directly into the hopper and if it is loading items into a hopper cart, then items will flow out at a pretty good clip. But unless you are putting items directly into the loading hopper via the GUI (right-clicking to see the slots), you don’t want to use a hopper cart because items will flow through the hopper from another inventory too quickly for the comparator to register their presence, meaning the falling edge circuit won’t work, period.

This system works but it is slow. Note that an auto-loading system that pulls items from a chest must load into a chest cart and not a hopper cart so that the comparator can register items passing through the hopper.

Items flow much faster from a hopper into a hopper cart, but you have to load items into the hopper manually.

A double chest over two hoppers empties twice as quickly. 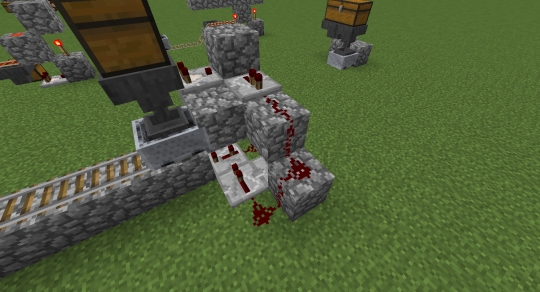 This is a compact way to get the Redstone signal down to the falling edge circuit.

Here is the falling edge circuit up close. It outputs into the block on which the powered rail sits.

But you still have to be careful not to put more into your double chest than your hopper cart can hold. Otherwise the Redstone signal from the comparator will never turn off allowing the falling edge circuit to pulse and send the minecart away. So you are limited to putting in only five stacks of items (or five different kinds of items) at a time. This kind of loader also doesn’t deal with a single item very well (you need to make sure that comparator sits behind the hopper that is either to the south or to the east, because a single item will go south or east, given an option). It works great if you place five or fewer stacks of items into the chest, but it isn’t smart enough to handle other kinds of situations.

If we want a more intelligent loader that can manage an indefinite number of items, we have to do something different. I have built a system that works really well, but it certainly isn’t the only solution, and it most likely isn’t the most elegant solution. But it works and it was fun to build. So there.

The first task is getting items out of the deposit chest and into a hopper cart as quickly as possible. As we saw above, double chest over two hoppers will empty at double speed. I have those two hoppers send items out into two 3-long hoppers chains going in opposite directions (to create a line of six hoppers). Using a little Redstone trick I’ve seen in a number of really impressive furnace arrays on YouTube recently, those items get distributed evenly amongst six other hoppers where they await pickup from a hopper cart. 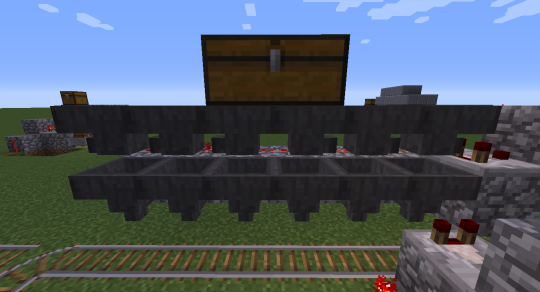 A double chest empties into two different hopper chains going in opposite directions.

Remember that the comparator that triggers the drop of items into the lower level of hoppers needs to be next to the hopper that is farthest to the east or the south (positive X or Z).

(2) The Hopper Cart is Released and Begins a Loading Circuit

As soon as there is an item in the south or east-most hopper on the lower level, another comparator sends out a Redstone signal that both releases the delivery hopper cart and closes a loop of rail to keep the cart loading until either it is full or everything from the chest has been picked up by the minecart.

When an item enters the south-most hopper on the lower level, a comparator sends a different Redstone signal. 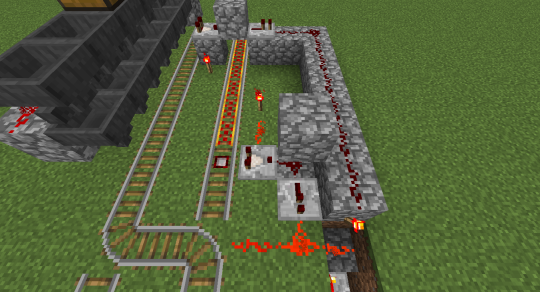 This new signal disables a Redstone signal that is currently causing the track loop in this image to be open. This means that so long as there something in that hopper, the loop will be closed, unless the minecart is close to full. If the minecart is close to full, the detector rail will reactivate that Redstone signal, opening the loop and sending the minecart to its destination even if there is still something in the above-mentioned hopper. 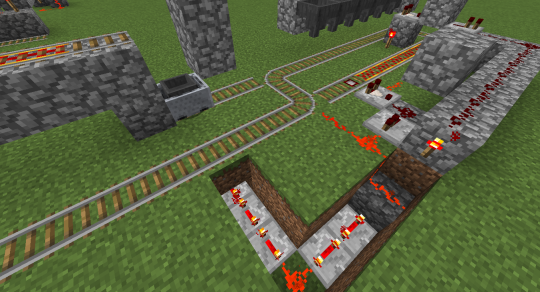 Beneath the hopper cart here is a powered rail sitting on a grass block above a Redstone torch. By default that torch is disabled by the Redstone signal at the bottom of the image. When something enters the south-most hopper on the lower level, not only does it close the track loop, but it also activates the powered rail (after a little delay), sending the minecart to begin collecting items from the lower level of hoppers.

The presence of items in the east or south-most hopper not only initiates the minecart’s collection circuit, it acts as a check for a minecart that is returning from its destination after having dropped off its load. Here I use a dropping one-way entry to make sure the cart goes in only one direction. The cart drops from a track two blocks above to land on its starting point. 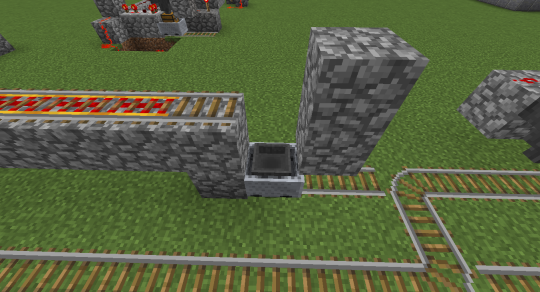 The cart returns via a different route (using another t-junction) and drops the cart onto its starting point so that it can either check to see if there are items still awaiting pickup or await a new deposit in the double chest.

I don’t pretend that this is the most compact or most elegant way to do any of this. Actually, making it a little bigger than it needed to be helps make all the parts of this intelligent loading system more obvious. What I like about this system is that it is self-resetting, it works with any number of items deposited into it, it cannot be clogged up by too many items, and it only works so long as items need to be sent. Systems designed to have minecarts constantly moving not only hog server resources but also are subject to failure whenever the game shuts down.