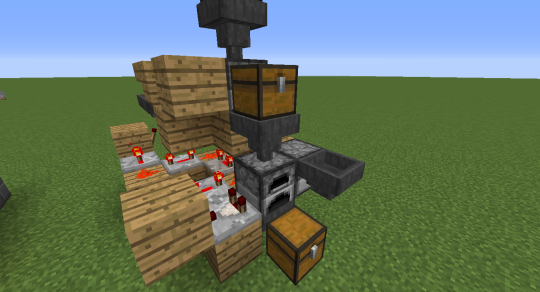 A complicated Redstone system for the unreasonably parsimonious.

Are you the kind of Minecraft player who won’t cook anything in a furnace until you have eight items (because that’s how many items a piece of coal or charcoal can cook – of course you would already know this if you are such a Minecraft player)? I am. I know it’s silly, because there’s more than enough coal in any Minecraft world, especially in a single player world. And IF I should ever run short, I can always cook up some charcoal. There’s no real reason to be the kind of player who demands 100% efficiency from my coal supply.

BUT such a player I am, nevertheless. I am also the kind of Minecraft player who isn’t satisfied with a process being easy and manual if I can make it complicated and automatic. So I have come up with a way to have a furnace cook items in batches of eight automatically using a (relatively) simple Redstone device that I call the 100% Efficient Furnace. First, I’ll explain how it works in detail, then I’ll show you how to build one from the ground up.

How the 100% Efficient Furnace Works

Essentially, what the 100% Efficient Furnace does is use a basic Redstone counter to cue up eight and only eight items for cooking in a standard vanilla Minecraft furnace. Only then does it insert a single piece of coal. Once the cooking is done and all items are pulled from the bottom of the furnace, a new Redstone signal resets the counter. So there are three basic steps in its operation:

Feeding Eight Items Into The Furnace

Items can be auto-fed into a furnace from the top by either a hopper or a dropper. For this task, we will use a dropper to insert eight items into a buffer chest and a hopper to draw items from that chest and feed them into the top of a furnace.

The way we get the dropper to insert only eight items is very simple: we use a comparator clock (with a slight delay from a repeater) to repeatedly activate the dropper so long as (1) there are items in the dropper and (2) there are items in another dropper that acts as our counter. So the comparator clock is actually activating not just one but two droppers. We’ll call the first the “feeder dropper” and the second the “counter dropper”.

A basic comparator clock. The dropper on the left is the feeder dropper, while the one on the right is the counter dropper.

As long as there are items in the counter dropper, this comparator will power the adjacent block and deactivate the two Redstone torches that are attached to it.

One Redstone torch deactivates the Redstone comparator next to the feeder dropper, so eight and only eight items have been inserted into the buffer chest. The other deactivates another Redstone torch that causes the hopper that receives counter items from the counter dropper to simply hold them rather than transfer them. I’ll explain this part below when we get to resetting the counter.

Why use a buffer chest? Without a buffer system (e.g., if we had the feeder dropper feeding directly into the furnace), we could only cook one kind of item in the furnace. But with a chest and a hopper acting as a buffer, we could theoretically insert one each of eight different items into the furnace.

This chest and the hopper under it act as a buffer so that this 100% Efficient Furnace can cue up different kinds of items rather than just one.

Feeding One Piece of Coal Into the Furnace

When the counter dropper is empty, these two Redstone torches activate. The one below and to the left deactivates the comparator clock and activates the fueling dropper so that it deposits a single piece of coal or charcoal into the furnace.

This is actually the trickiest part of the whole build, and there may be better ways to do this. Specifically, I think a falling edge Redstone pulse detector connected to a comparator adjacent to the furnace may be a more elegant way to accomplish the resetting of the counter dropper. But what I have done works and works really well, so here you go. 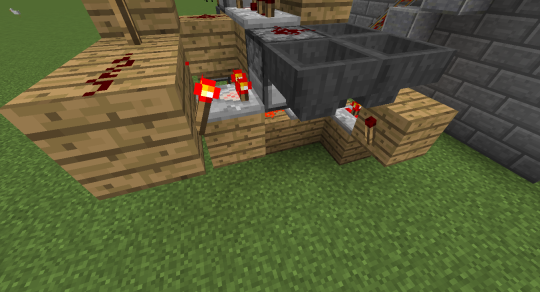 This Redstone torch allows the hopper to receive items from the dropper but not transmit them into the next hopper in the chain.

When the counter dropper is empty, the Redstone torch turns off and allows items to leave the hopper.

Then, rather than feeding those items back into the counter dropper (which would start things back up immediately), it feeds the eight items into another hopper. This hopper is deactivated by a Redstone torch once the furnace has anything in it (a comparator is next to the furnace). When the furnace finishes cooking and is emptied of items, that Redstone torch is turned off, allowing the hopper to send items through one more hopper and back into the counter dropper, starting the counting process all over again. 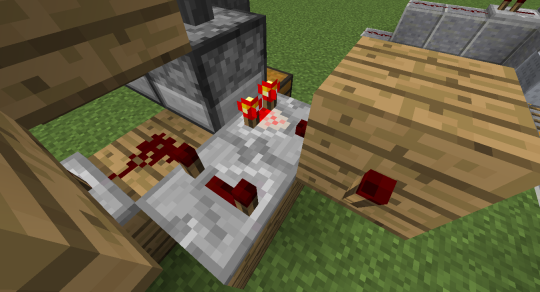 A comparator detects whether or not the furnace has anything in it.

The comparator signal is routed, with a 14 tick delay, to a Redstone torch that sits under one of the hoppers in counter hopper chain. 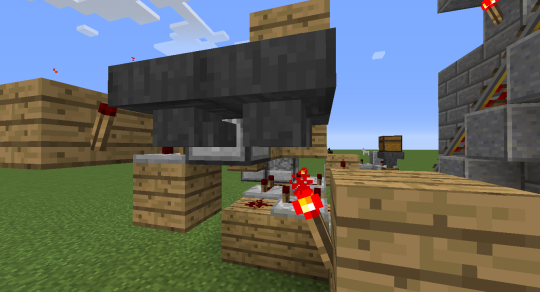 This Redstone torch keeps the hopper above it from transferring items so long as there is anything inside the furnace.

It is necessary to have a pretty significant delay on the Redstone signal coming from the comparator (a total of fourteen ticks: it travels through four repeaters, three of which are set to four ticks, one of which is set to two ticks).  The reason is that without this delay, not all items make it out of the second hopper before an item enters the furnace and reactivates the Redstone torch under that second hopper. A delay of 14 ticks is the minimum necessary to allow all the counter items to flow back into the counter dropper.

How to Build a 100% Efficient Furnace

There probably is a way to make this build more compact, but what I have designed here is 5 blocks wide, 5 blocks tall, and 7 blocks deep.

This layer is very simple. The hopper feeds into the chest. This is where the cooked items end up.

Immediately, things get more complicated. A furnace sits directly above the hopper from the first layer. The (fueling) dropper to the furnace’s side needs to be facing the furnace. I have a slab behind the fueling dropper, but this isn’t necessary. It can be a normal block. There is a purely optional hopper feeding into the fueling dropper.

Note the delays on the repeaters. This is very important. Three of them (and it doesn’t matter which three) must be on a full four ticks. The remaining repeater needs to be at least on two ticks. 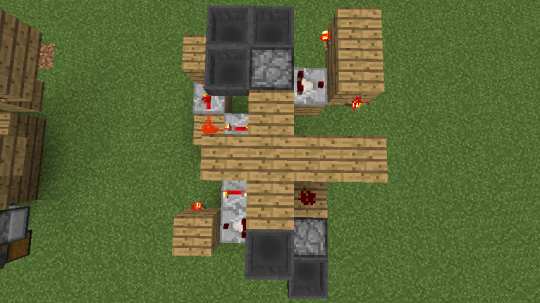 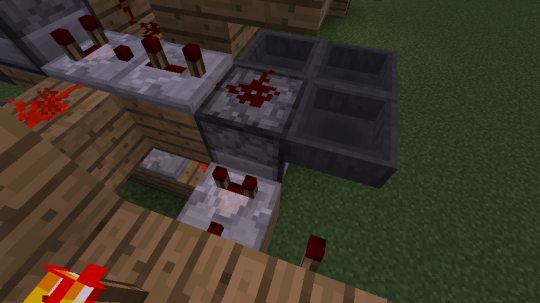 This pic shows the slab above the hopper. Redstone signals will travel upward to slabs but not downward from slabs.

The final layer is simple: three pieces of Redstone to finish off the comparator clock and a hopper to feed into the feeder dropper. This hopper can be placed next to the dropper rather than above it, if you like.

You can easily surround this Redstone contraption with blocks to make a building. I built this in my survival world and decorated it this way.

A building made from bricks, red stained clay, spruce stairs, stone brick, and cobblestone wall. The chest on the right is an input chest.

In creative I encased it in a simple stone block box (with some smokestacks, too).

You may have noticed that the input hopper is not the easiest block to reach, whether you place it above or next to the dropper. You may want to devise some way to transport items from a chest into the input hopper. In my survival world, I just used a dropper chain and some hoppers. In creative, I used a chest cart with some cool Redstone. I actually like my creative delivery system better, and I may blog about it in the future.

If you have any questions about this build, please feel free to ask in the comments.